Last year, Minneapolis locals recognized Allan, the Sandwich Man, for handing out sandwiches on the streets. However, what they didn’t recognize was the van he was riding in. The full-sized van was given to him by a family whose son suffered from muscular dystrophy. People were reaching out to the Sandwich Man in ways that he could never have imagined.

Most days, Allan sleeps for a few hours before waking up before sunrise. He goes to the heart of the city and hands out bus tokens, blankets, and hygiene packs to the needy. He does this until around 11 in the morning when he arrives at Mendota Heights to begin packing his van to the ceiling with ham and cheese sandwiches. The sandwiches are provided by volunteers at Hormel Foods and Target. Allan has at least 17 freezers in his apartment, which he can place over 20,000 sandwiches on any given day. 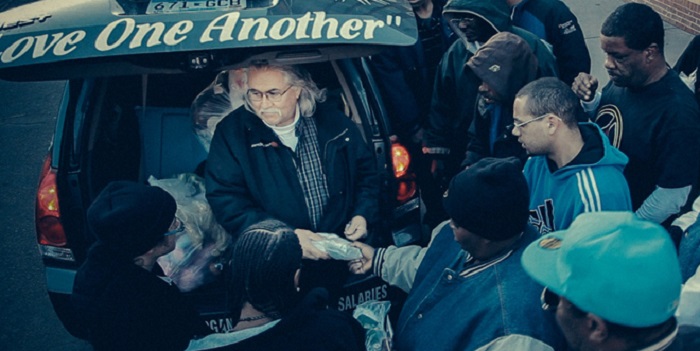 Angel Montanez, a pastor at a local Hispanic church, calls Allan “tireless.” Every week, he does the lord’s work by feeding the hungry. He really gets the people of Minneapolis, and they get him. He understands how they think, how they speak, and what they need. Maybe his experience as a teacher has helped him connect with others.

Allan’s goal isn’t to achieve internet stardom or go down in history as the kindhearted Sandwich Man. His goal is to feed mouths. The ex-teacher and cancer survivor has slowed down recently, and he’s fallen asleep at right lights more often than he can count. He has a simple flip phone where he receives text messages about where to go. A paperback address book reminds him of which places he needs to pick up food and where to deliver.

PrevNext post
Monster with ‘Dreadlocks’ Found in Home of Alzheimer’s Patient
No Good Pizzerias in Space? The Crew of the ISS Will Change Your Mind
Against All Odds, Hugs Café Finds Success During Pandemic
Hundreds of Strangers Gather for WW2 Vet’s Funeral
© Copyright 2019