Pilot Bret Hutchings, who was tasked by the Department of Public Safety to investigate the metallic structure, told reporters that encountering the monolith was the strangest experience he’d ever had in all of his experience as a pilot. While he offered no definitive answers as to what purpose the monolith serves, he had a few theories.

First, some new-age artist might have placed the monolith in the middle of the desert as a statement of some sort. Another possibility was that someone was a huge fan of 2001: A Space Odyssey and wanted to pay homage to the film in his or her own mysterious way. After all, from its appearance, one can see its resemblance to the monument constructed by an unseen, unknown civilization in the 1986 film. 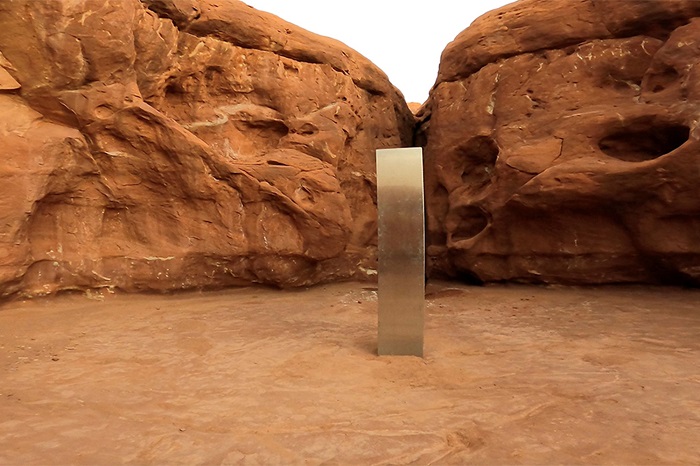 The Utah Department of Safety further explained that installing such artistic structures without proper authorization and on federally managed land was illegal, regardless of what planet you come from. The report finally landed on the Bureau of Land Management’s desk, who will take the proper precautions to examine the monolith and take necessary action.

As far as the local government is concerned, the monolith is a form of vandalism that needs to be dealt with carefully. The construction might affect or even damage the natural artwork that took millions of years to form.

For those who wish to hop on a plane and visit the monolith in Utah, you’re out of luck. Even though the Department of Public Safety let the world know of its existence, it is unmoving in its decision to disclose the whereabouts out of fear that it might inspire others to follow suit and create an illegal trend. While the monolith is admittedly more aesthetically pleasing than graffiti, vandalism is vandalism. And those who can correctly guess where the monolith is, please take the proper precautions before visiting. While it’s unlikely that this metal construct is toxic, visitors might end up causing unintentional damage to its surroundings.