On a day like any other, a quadrupedal creature decided that it would be a good idea to a leisurely walk up a sand dune. In doing so, it left a set of footprints that somehow managed to survive over the course of hundreds of millions of years. 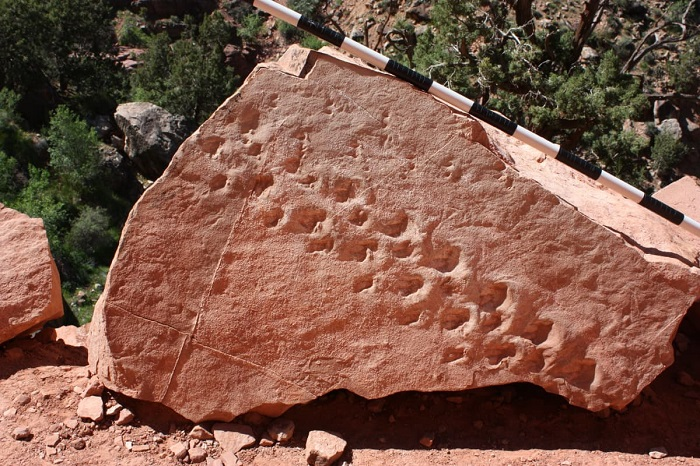 And on a day like no other, this time in 2016, a geologist and his team of students went on a hiking trip to the wonderful Grand Canyon. It was there that the geology teacher first laid eyes on the tiny footprints from a creature of old times on the surface of a rock formation that had taken a spill down a cliff and somehow wound up in the Bright Angel Trail.

While this discovery in and of itself would be amazing to fossil researchers, there was something else that the teacher didn’t yet know about the tracks. Apparently, these tracks were the oldest to ever be found in the Grand Canyon. They date back to the same period where animals laid shelled eggs roughly hundreds of millions of years ago.

A team of paleontologists from the University of Nevada in Las Vegas led by Professor Steve Rowland and found a pair of old footprints on the same rock that, if their guess is correct, might have belonged to the same mysterious species. According to Steve, the footprints may have survived over the years due to a period where the sand was dampened to form a protective crust. This was then buried in layer upon layer of sediments, which had kept the tracks in tiptop shape.

After carefully looking at the ancient tracks, Steve guessed that the creature who left the tracks was merely a foot in length. Using his pet cat as inspiration, he also guessed that the animal strutted with a lateral gait. The left read leg would move before the front left leg, the same would happen on the right side, and so on.