Even though Pizza Hut was the very first pizza chain to supply the heroic researchers on the International Space Station with tasty, tasty pizza, they haven’t done so for close to 20 years. However, that doesn’t mean that the crew on the ISS has to go pizza-less for several months.

A heartwarming video released by NASA shows the six of the Expedition 53 crew members getting set up for a movie night. With the movie ready to play, all they needed to fully enjoy it was snacks. And as luck would have it, there just happened to be some out-of-this-world pizza aboard the space station! 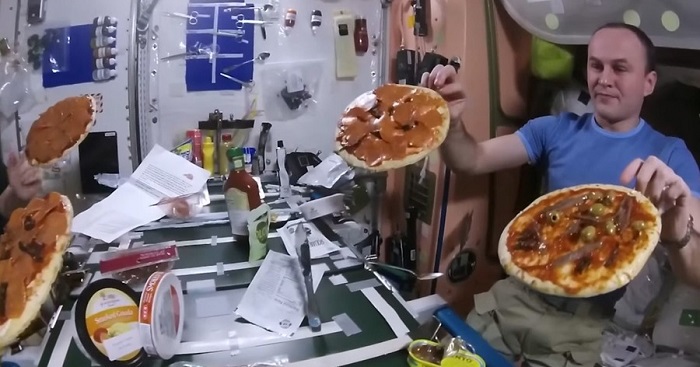 Paolo Nespoli, one of the six crew members, made an informal complaint to headquarters that space didn’t offer much in terms of pizzerias. Thankfully, his complaint didn’t fall on deaf ears. Among the supplies sent to them via the resupply rocket, Paolo was over the moon to find that NASA had provided them with all of the ingredients they needed to make their very own pizza.

Since they were in space, and everything in space floats, the six astronauts had to be incredibly careful when piling their toppings onto the crust. Everything had to be tethered down to prevent slices of pepperoni from finding their way into the delicate electrical works of the space station. They were provided with ingredients that stuck to the crust and sauce, ensuring that no crumbs would go airborne and cause the station to go haywire.

Toward the end of the video that NASA uploaded onto YouTube, the astronauts proudly displayed their individual pizzas for the thousands of viewers at home. They playfully remarked how their pizzas were superior to the others before happily chowing down on their crusty zero-g creations. The best part is how they didn’t have to put their slices down between bites. It’s space! Their pizza just remains airborne until they’re ready to dig in again.